A Q&A with Larry Erickson, Global Director of The Exteriors Design Group

Noted auto designer Larry Erickson’s portfolio includes such iconic vehicles as the 1992 Seville, 2005 Ford Mustang and Cadzzilla, a custom 1948 Cadillac created for ZZ Top’s Billy Gibbons. Erickson, who has been called “a designer for all seasons,” became global director of industrial design for Magna Exteriors in June, tasked with helping the company to envision the car of the future.

Highly regarded for his work on production vehicles, as well as custom cars and hot rods, Erickson describes himself as a “serious car junkie.”

After earning a Bachelor of Science in Industrial Design from Art Center College of Design in Pasadena, California, Erickson began his design career at General Motors Design in 1983 in its Advanced Aero Studio in Warren. His tenure at GM included serving as Vehicle Chief Designer in the Chevrolet Studio working on the Small Car programs and serving as a Senior Exterior Designer for Cadillac Studio.

As head of Transportation Design at Detroit’s College for Creative Studies, Erickson helped to inspire and teach the next generation of designers. His personal garage includes a 2015 Ford F-150 pickup, a Mercedes-Benz 500E with 238,000 miles on the odometer, and “enough tools and parts to build another car.”

What is your goal at Magna?

In a larger picture, I’m helping the people I work with envision where vehicle exterior design can potentially evolve. Innovation on something as complex as a vehicle, especially with the changes in society right now, requires careful consideration. It takes empathy for the user, imagination to anticipate the challenges around the corner and the knowledge to turn that into something productive.

So you’re envisioning the car of the future?

Yes, and more specifically, the parts that will make it deliver what the customer needs. For example, more people in the future are likely to get into a car that is not theirs, a car that they don’t own, in a situation that is new to them. Right now, someone gets into their car in their driveway or their garage. Going forward, in a lot of situations, that exchange will be completely new because of ride-sharing, fractional ownership or new transportation services. You will need new information about the vehicle. You will need to feel safe. The lighting around the vehicle will need to be different. The way you figure out which way to get into the vehicle will be different. Today, most exterior door handles are shaped like a door handle was in 1970. With new technology, that is already showing signs of change. In the future, the handle may have some way of “acknowledging” that it exists only for the intended user. It may take some kind of graphic designation or a light or your phone could tell you which side of the vehicle to walk up to.

Are you designing a car for Magna?

No. We’re focusing on the parts that the exteriors group makes. Now that’s a lot of the exterior of the car and going forward, it could be even more of the exterior. We may envision different exterior features, unique exterior panels or develop concepts of what new functions those areas of the vehicle can do for the user.

We’re working on digital representations of vehicles. You need something to show a part in context with your customer. The vehicles are not brand specific, but segment-specific, such as an SUV, pickup or sedan. It’s easier for customers to understand how that liftgate works or that fascia works when they can see it on an actual vehicle. That context gets more difficult the farther out you go, for example, when you start developing an autonomous car. 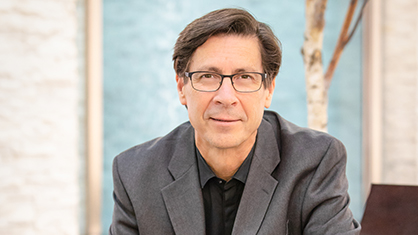 "The Magna brand is innovation, driving excellence and outstanding leadership."

You’ve said “successful design understands the meaning of the brand.” How would you describe the Magna brand?

The Magna brand is innovation, driving excellence and outstanding leadership.

Magna people understand how the material works and how to manufacture it. We have a great process to perfect the manufacturing sequence. When you sit in meetings, you see the transparency in the way we talk about an issue. We collaborate. It gives us an advantage in taking on challenges. It’s striving for a sense of excellence in everything we do.

You’ve urged your students not to follow conventional ideas. How would you describe yourself?

I’m committed to the idea of what a car could do, whether that’s allowing easy access for people and goods, moving efficiently through the air or looking fantastic. It helps to have an emotional connection to making those things. If you’re the greasy-fingered type, which I am, you always have an interest in the building blocks that make up the whole. You can actually spend part of your vacation going to the Bugatti museum and looking at blueprints.

What non-auto design inspires you?

So many things: motorcycles, airplanes, even locomotives. I’m inspired by Isambard Kingdom Brunel. He was a 19th century British engineer who designed steam ships, tunnels and railways. At a time when manufacturing materials were presenting unique opportunities, he had the courage to do things people thought couldn’t be done.

Are you still a hot-rodder in your off-hours?

Yes, I’m working on the Model A Ford for the Bonneville Salt Flats. The emphasis is on the working, enjoying the process of building and taking time to get it just right. The hardest part is finding time. You don’t want to hire it out as that’s not the purpose.

What the difference between engineering and design?

Engineering involves design, but with engineering, there is more focus on the properties and functions of the material and the pieces that make up the function. To describe the part of the sequence where you assemble all those pieces into something that serves a function, that’s where design starts. A good vehicle designer is always thinking about the total vehicle, aerodynamics, human factors, user features, functional performance, the appearance and even the personality of the finished product.

What kinds of shoes are you wearing? Car designers always have the coolest shoes.

Just plain black ones. Being a serious car junkie, I spend my money on cars and tools.

We want to hear from you

Send us your questions, thoughts and inquiries or engage in the conversation on social media.

Mezzo™ Plus Featuring Morphing Surfaces: Reimagining the Face of a Vehicle You can stay connected with Magna News and Stories through email alerts sent to your inbox in real time.